40 Days with the Narratives of Enslaved People 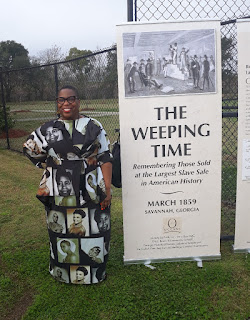 I hadn’t decided what I would do for Lent. As a relatively new Episcopalian ( I’m like, 7,) I’ve learned to give up less and take on more.

With the help of friends, I had already made and distributed coats for the homeless. I mentor millennials on the regular, and try to do my part to clean, defend and protect mother earth.

I had prayed and meditated, but nothing came to me. Then I heard two sermons that helped guide my path. One came from our rector, Michael White. He’d preached about the Weeping Time where 436 people were sold away here in Savannah in 1859. He talked about how close we are in time, and still, we don’t always remember.

The other sermon came from our deacon, Samantha McKean who talked about the Lenten season as a time when we go back through to recall, recollect and remember what we have endured.
After hearing both, I knew and understood what I was being called to. So, for the 40 days I read the narratives of enslaved people. I wanted to go back into the wilderness of the time of enslavement to hear the words of those who had made it to freedom.

At first, I wondered how I would get through it. I was angry, rightly so, but I was also appalled by the details that I had turned away from. As a sociologist and author, I had already spent a great deal of time studying that horrible period that is our history. I collect first edition books by and about slavery. Throughout the years, I have also collected the “bills of sale” of enslaved men, women and children and I have tried my best to write and speak the truth about the building of America with free labor on stolen land. Still, it is a different thing to submit one’s self to hearing the voices of those who lived that enslavement and another thing entirely to do so for 40 days straight.

The constant beating, raping and degradation was far too much for my psyche. Still, out of a sense of obligation I continued to read and when I did, something miraculous happened. I became ever so grateful for all my ancestors. My anger towards others turned its gaze on me and I was sorry for not spending enough time in gratitude and appreciation.

Then, the gratitude became the inspiration I needed to move beyond my own physical limitations; the chronic illness that had stopped me from moving beyond my limits. Each day, I got up to mediate and then exercise through the pain in my limbs and lungs and then I would read some more.
The reading became a part of me and everything else an interruption. I didn’t want to part from the voices in those books who literally left blueprints for freedom from absolutely anything; for if they could get past the lash, the dogs, cold wet nights, starvation and lack of direction, then surely, I could get through my New World mess.

I have continued to read these narratives and have added books about enslavement and Reconstruction as well. As I read, I am rewarded with a history that is replete with not only suffering, but also rich with survival. Each day, I feel blessed and in awe of the fact that through all of this, I am still here.

Me and Joe Biden 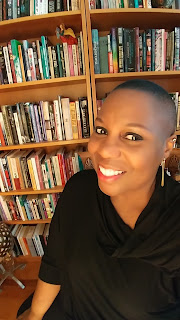 Me and Joe Biden

I try to keep these blog post free of politics, but sometimes, they creep in; then in others, like with this one, they are a part of my story. Here it is---

With the help of my amazing Public-School educators, I was able to become the first in my family to go to college. Now, when I say, “first in the family,” I am not referring to just my siblings; I mean, my entire family.

Going from Wilmington, Delaware to Jacksonville University was a dream come true. An unknown wealthy benefactor had stepped up, promising to cover whatever my grants and scholarships did not. Still, I needed money for books, laundry, personal items and weekend meals. (I had signed up for the 5-day-meal plan to save money.) Additionally, I still had to help-out at home. The loss of the money that had come from my two cleaning jobs left a whole in my mother’s overtaxed budget. My mother worked double and even triple shifts at a nursing home that was run on a shoe string budget, so as soon as we were able, my six siblings and I all did our part.

After I made my way to college, my oldest sister, Myrna began to suffer from complications with diabetes. This was in the late seventies when the awareness and maintenance of diabetes was no where near where it is today. Myrna was my bright light. She was intelligent, independent and an artist. Her paintings were marvelous, but she made her living as a free-lance photographer. As my sister’s conditioned worsened, she became unable to work. Because she was unable to show up for her assignments, she’d lose the booking and eventually stopped getting calls completely.

In college, I did my part by working on weekends and after classes, taking cleaning jobs and anything else I could find. I did store inventories, braided hair, baby sat and even picked fruit.
Myrna had tried to get disability benefits but was repeatedly denied and often told, that she “looked and talked just fine.”

That’s when I remembered our Junior Senator Joe Biden.  He attended school events and would often visit with the pastor of my church to discuss ways to end violence and bring people together.

I wrote to him asking if he could check into my sister’s case. I told him that I was in college and on the Dean’s List, but I didn’t know how long I could keep up with school work and all my odd jobs.

This is when my two-week “affair” with the Senator began. Back then, we didn’t have cell phones and only a few of the wealthy kids had phones installed in their dorm rooms. For everyone else, you got a call at your dorm’s front desk. The person on duty would page you through an intercom system and you came down for your allotted 10-minute call. I remember my dorm-mates racing down the stairs to get to the phone, because the 10-minutes started when you were notified.

For two-weeks straight, Senator Biden called my dorm every single day. With all but the last call, I was either in class or on one of my odd jobs. When I got back to the dorm, I’d stop at the desk for messages and find that I had another call from Senator Biden.

“Bertice, your boyfriend called,” the desk attendant would say jokingly. Word got out on our close-knit campus that I was getting calls from a Senator and all my friends got in on the act.
“Did your man call today?” they’d ask laughing. “He’s not my man.” I would say. “Then why is he calling so much?” the inquiring minds inquired.

I didn’t want to tell my college friends that I needed him to help my poor family, so I just said that I didn’t know.

“Call him back.” They would say. I also didn’t tell them that I couldn’t afford to use the pay phones to make a call in the middle of the day.

Then one afternoon, I was in my room when Senator Biden called. “Bert—iiiice, it’s your boyfriend.” The desk attendant said laughing. I came flying down the four flights of stairs and was panting when I said “Hello.” Without waiting for much more, the then Senator and now former Vice President, Joe Biden went right to business.

“Bertice,” he said pronouncing my name correctly, “I’m proud of you. All of Delaware is proud of you,” he said. “You are breaking a cycle. I know where you’re from. That’s a tough neighborhood.” I could hear his pride and amazement.

“You are doing well,” he said, “But with all of your jobs, you won’t be able to keep it up.”
Without waiting for me to say anything he continued, “I’ll make you a deal, if you’ll continue to do well in college, I’ll see that your sister is taken care of.”

With tears flowing down my cheeks, I managed to say thank you. He told me to keep up the good work and said good bye, and I sat stunned that a Senator was reaching out to help me. The desk attendant asked what happened, but I went back to my room and cried some more.

Just two days later, I got a message of an unexpected call from my sister. My family rarely called because we couldn’t afford it. I was surprised when I read the message that said to call back collect. I did and learned that our Senator had been true to his word. The day after we had spoken, someone hand-delivered a check to my sister for disability benefits. The check amount included the two years that she had been denied.

I no longer had to take odd jobs. Each month, my sister Myrna sent me money for food and personal items. I excelled in my classes and even became the first African American in the history of Jacksonville University to win the President’s Cup for Leadership. I went on to graduate school and earned a doctoral degree at the age of 26. My sister Myrna didn’t get the chance to see me graduate. She died from complications with diabetes. Before she died, she was able to get the care she needed, and I was able to soar.

This is the Joe Biden I know. I know him to be passionate about his people and true to his word.

Back when I was still an undergrad, I wrote to Vice President Biden and told him that if he ever ran for President, I would be on his side. I meant it then and I mean it now.
There is nothing like faith, but faith without works is dead. He believed in me and worked to make me know that my senator cared.

When I hear his name, I don’t think about his age, I don’t think of his international work. I don’t always think of him as Vice President. I think of that young junior Senator who was dealing with his own work and family but took the time to care for me and mine. I want to see a woman President, but if he wants a turn, I will be right next to the man who helped me have mine.